Advocates have pushed for years to put a constitutional amendment before voters to ensure Texas parks and historic sites get the maximum funding authorized from a sales tax on sporting goods. They have finally succeeded.

Sunrise over the historic Alamo in San Antonio, Texas.  Robin Jerstad for The Texas Tribune

State parks and historic sites across Texas could receive a much-needed bump in funding in the not-so-distant future.

In a big win for outdoor enthusiasts and day-trippers alike, legislation that would ensure that the Texas Parks and Wildlife Department and the Texas Historical Commission always get the maximum amount of money they are allowed to receive through a state sporting goods sales tax has passed both the House and Senate and now heads to Gov. Greg Abbott’s desk for his signature.

The legislation, which seeks to amend the Texas Constitution, also requires voter approval. The measure will appear on Texas ballots this November, where it would need a simple majority to pass.

In 1993, state lawmakers passed legislation allowing up to 94 percent of the sporting goods sales tax to go to parks, with the remaining 6 percent designated for the state’s historical commission, which maintains Texas’ 22 historic sites.

However, in the following decades, they allocated an average of just 40 percent of the tax to the parks system and used the rest to help balance the state budget, according to parks advocates. From 1993 to 2017, Texas collected nearly $2.5 billion in revenue from the sporting goods sales tax, but lawmakers allocated only about $1 billion of that to state parks.

The first time lawmakers allocated the maximum 94 percent for parks and historic sites was in 2015.

State Sen. Lois Kolkhorst, R-Brenham, and state Rep. John Cyrier, R-Lockhart, worked together on Senate Bill 26 and Senate Joint Resolution 24, which they said would help agencies like the TPWD and the THC plan long term for repairs, projects and new parks.

Kolkhorst – whose district includes a number of state parks, including Stephen F. Austin State Park and Goliad State Park – said the legislation is about ensuring that all Texans can enjoy the state’s natural areas.

“The state has a responsibility to provide for our state parks and historic sites,” said Kolkhorst at a January news conference on the legislation. “This is truth in taxation.” 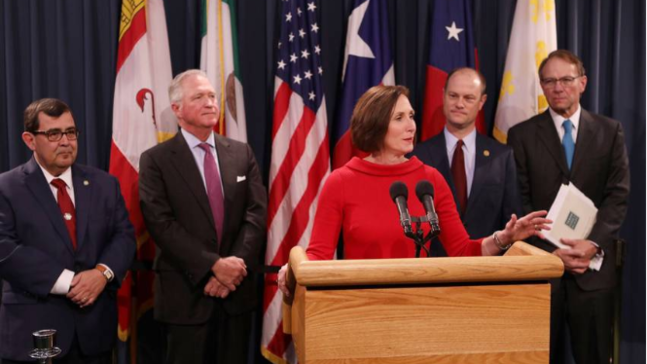 “As the state has grown, the demands upon our parks continue to mount so this bill will give voters the chance to assure their future with a predictable, dedicated and sustainable funding stream,” Duggins said via email.

A spokeswoman for TPWD said it is still too early for the agency to comment on improvements at specific sites, but longtime parks advocates say more funding would help repair over-burdened roads, bathrooms, bridges and trails. Nearly 10 million people visited Texas’ state parks in the 2017 fiscal year, putting increasing pressure on a parks system that already has an estimated $781 million in deferred maintenance needs.

Just this month, the spring-fed swimming pool at Balmorhea State Park – deep in the heart of the West Texas desert – closed again briefly for repairs. It also closed in 2018 following the collapse of a wall because of erosion. Oil and gas company Apache Corporation donated $1 million to the Texas Parks & Wildlife Foundation in January as part of a fundraising push by the nonprofit for repairs.

George Bristol, a parks advocate who has worked on the issue for years, said he always thought a constitutional amendment was needed to ensure that the funds generated by the sporting goods sales tax go where they were intended. Bristol said more funding will help to prevent minor repairs from becoming major ones at parks.

He said that natural disasters, like Hurricane Harvey in 2017, have also placed a strain on parks – some of which took in evacuees after that storm.

“That has added a lot to the maintenance price tag,” said Bristol, who founded the Texas Coalition for Conservation. “There’s an argument right there for the fact that you have to have something sustainable so that you can plan ahead.”

Joseph Fitzsimons, former chair of the Texas Parks and Wildlife Commission and a founder of the Texas Coalition for State Parks, said the priority now is to “vigorously support” the passage of the constitutional amendment come November.

“Because of the Legislature’s hard work and dedication to this important issue, Texans will now have the opportunity to affirm their support of our state and local parks at the polls,” Fitzsimons said in statement last week, thanking Cyrier and Kolkhorst. “Future generations of Texans will have them and the entire Texas Legislature to thank for this historic effort.”

State parks to get steady flow of funding